How I Found the Power of Vulnerability 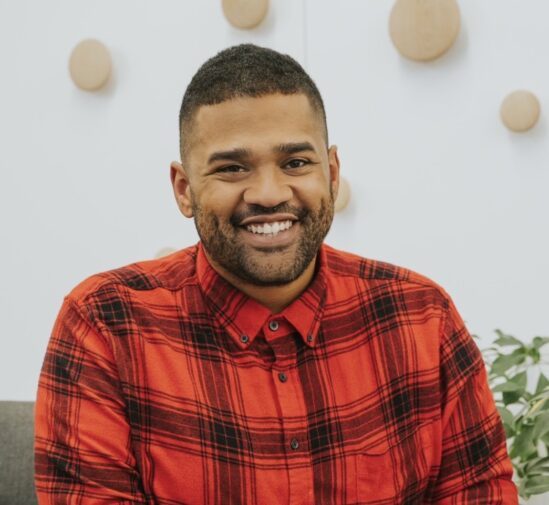 Hey there, thanks for checking out the latest IC blog post! Let me take a moment to introduce myself, I’m Drew Pauly and I just started at Inclusive Communities back in September. I’m the Volunteer and Faculty Manager. I hope these words find you well.

Let’s jump right in. If you know me, you know that I’m all about authentic engagement and being vulnerable. When I meet someone, I will bring my whole self and share about who I am, and what my experiences have been unapologetically and authentically. Who you see in person, at work, or on social media is the same person. This throws a lot of people off since it’s not the norm, however I believe that when we strip away the formalities, power distances, and preconceived notions of others we can build a meaningful relationship. In my philosophy, at the end of the day we are all just souls in bodies navigating through this thing called life.

I do this when I’m facilitating a session, leading a group conversation, or speaking in a public space. I want people to be comfortable with me. I want to know how you truly are when I ask “How are you?”, if you have been having a hard time, I want to know. I want to hear about your passions, dreams, and take on if the toilet paper goes over or under (#TeamOver).

I think the idea of vulnerability and owning that uncomfortable step started in high school. I’m gay and there’s a heteronormative view of society, and therefore the default assumption is that we’re all straight unless someone “comes out” (this is a whole different conversation). Now, with that in mind let’s step back 15 years before I came out in high school. I had a classmate that was a bully and started to try to bully me with homophobia. Now listen, this wasn’t the first time I had been bullied; As an overweight black gay kid you’re an easy target. However, I’m not the one, okay? My mom raised strong and confident men (thanks mom), and I readily stuck up for myself. For context, I’m a 6’3 280lb black/Italian guy who was only a few pounds lighter back then; this means that I’m always going to be the one to get in trouble if I get into a fight. As a result, I have a sharp tongue, am quick with the clapback, and not easily scared.

I had this moment where I could tell things were about to escalate, and I came to the realization that a secret isn’t a secret if you own it. This meant that I could take away the power of the person that wants to use that over me. What did I do? Of course, I leaned into this uncomfortable and scary space and owned this truth of myself, of being gay. In so doing I felt a lift in anxiety. There wasn’t this secret I had to hold deep inside, now it was merely a truth I owned, and that required a lot of vulnerability to be the out gay kid in high school, over a decade ago. Vulnerability morphed into a strength.

Then, in my early twenties I would post on Facebook about my mental health “in real time” as I was in a depressive episode or a manic episode, or my ADHD was really getting to me. I would write about how it felt, where my mind was at, and then provide information about bipolar disorder and ADHD. I wanted to break this perfection and comparison culture we see on social media. I wanted to end the stigma around mental health. In my vulnerability I hoped to shed light on suicide and show others they’re not alone, that it’s ok to not be okay. These posts were the ones with the largest amount of engagement. I started to get private messages from people wanting to know more, sharing their own experience, and asking for resources. They all had one shared element, an expression of gratitude in being vulnerable and being an island in the middle of the ocean.

You still with me? Ok, good because here comes the powerful part of all of this. Stick with me.

I’m a cis man. I have been socialized by society to believe that I must be strong, not express weakness, emotions, and that if I did no one cares. This is something that has come up in a lot of conversations I’ve had with other men, and I see it on social media. When we look at data surrounding male vulnerability and its impact in society, there is power in stepping into vulnerability. It’s transformative and healing for both the person and society. Here are three pieces of research that shed light on the impact of adverse socialization on male vulnerability:

What sticks out to me is the power of male vulnerability doesn’t only impact themselves, but also society at large. If we want to see a society of healthy and strong men, we need to teach boys early on and continuously how to emote. We need to teach them how to recognize how feelings can manifest in unhealthy ways. We need to teach men that vulnerability isn’t weakness, its strength. That when the darkness surrounds them that they can reach out and someone will sit in the dark with them. That people do care enough for you to turn to in these moments. We dismantle toxic masculinity when we begin to educate men that it is human to be human.

We can see nearly a 70% reduction in sexual violence, and nearly a reduction in bullying, suicide by close almost 50% (rounded up for perspective); all because of teaching boys that vulnerability isn’t something to be perceived as weak. To think that almost 15% of men believe depression is something one can just snap out of is alarming. How do they view depression in not only themselves, but also in others? What type of support can that 13% provide to those in their lives living with depression? I think we must look at male vulnerability as an untapped and stigmatized strength. A strength that can transform lives and communities.

I’ll step off my soap box by saying this: be unapologetically you, be your authentic self, and be audaciously vulnerable. You don’t know who will be positively impacted. If anyone ever tries to weaponize your vulnerabilities, remember that in owning them, they have no power and it speaks not to your weakness, but to the detriment of their character.

Back to Blog Next: Boundaries